The Pathogen Surveillance in Agriculture, Food and Environment (PATH-SAFE) programme uses the latest DNA-sequencing technology and environmental sampling to improve the detection and tracking of foodborne disease (FBD) and antimicrobial resistance (AMR).

Foodborne disease (FBD) is a major public health risk with 2.4 million individual illnesses and more than 16,000 hospitalisations per year. Most human disease is caused by a handful of bacteria which enter the food chain from farmed animals or the environment. In addition to FBD, the agri-food supply chain also poses a risk for the transmission of antimicrobial resistance (AMR) through food, animals, humans, and water.

Whilst the UK has made progress in reducing its use of antibiotics in humans and animals in the last five years, drug-resistant bloodstream infections in humans have increased by 32% from 2015 to 2019. The rise and spread of AMR is creating a new generation of ‘superbugs’ that cannot be treated with existing medicines.

For these reasons, government departments already undertake surveillance activities by analysing samples from food, livestock, and humans. Recent advances in technology and data management offer the opportunity to create a step change in surveillance, to protect public health. The PATH-SAFE programme will establish a new data platform that will allow for the analysis, storage and sharing of pathogen sequence and source data, collected from multiple locations across the UK by government departments and public organisations. This single system will enable rapid identification and tracking of FBD and AMR. This will improve public health and minimise the economic and environmental impact of outbreaks.

Aims of the programme

Benefits of the programme

The FSA is the lead organisation for the programme, with several core and delivery partners. As the programme develops our partnerships and collaborations continue to grow.

The Strategic Project Board sits at the top of the governance structure and provides strategic oversight to the programme.

The Project Delivery Board, supported by the FSA Project Management Team, has four different workstreams from which information is fed: 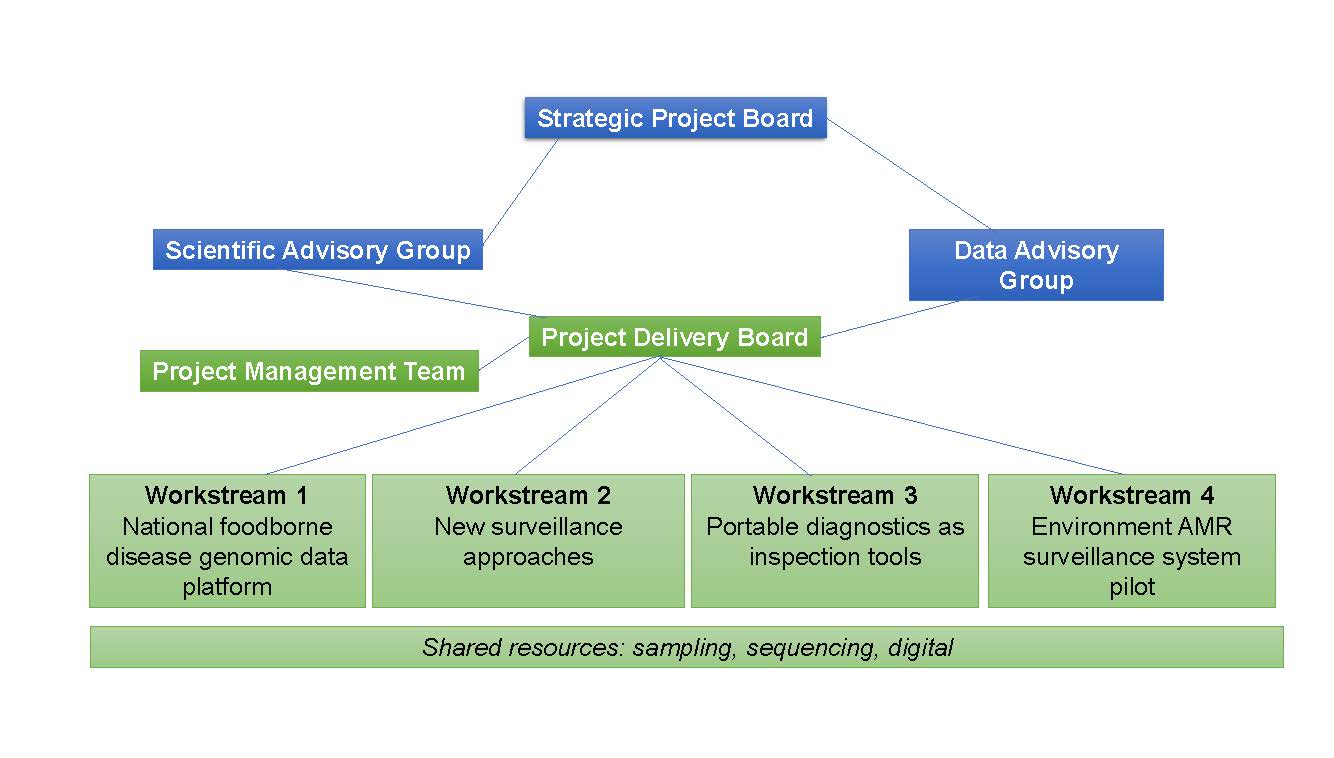 The programme is in phase 2 of the SOF and will run until March 2024. A more detailed timeline and update on key deliverables is under development and will be added here in due course.

Part A: The UK is recognised global leader in genomic database systems. We will utilise this existing expertise, working with academic colleagues and major ‘big data’ stakeholders, to create a user-friendly platform for the rapid interrogation and archiving of genomic data. A key element of the data platform development will be allowing the integration of sample data with other existing data sources, for example, infection data and meteorological data, to create new knowledge.

Current status: Discovery is complete. The findings from this work will support the development of the exemplar data system, which will be tailored to meet user needs and support rapid decision-making. A summary of the findings will be shared with programme stakeholders in due course. A consortium approach to the delivery of the data platform will be taken. Contracting with consortium partners is in progress. Delivery is set to begin in February 2023.

Part B: The aim of the PATH-SAFE Scottish pilot is to use whole genome sequencing (WGS) to understand source attribution, infection threat, and the level of AMR of E. coli. Samples will be taken from a range of different reservoirs in Scotland. This includes animal hosts, bathing water, wastewater, soil/plants, food, and humans.

Current status: More samples are being sent for whole genome sequencing (starting Jan 2023). 800 samples from animal hosts (wild deer, cattle, pigs, poultry and sheep) have been sequenced to date. These will form the basis of the analysis for the first report, due in April. Isolation of E. coli from shellfish, wastewater, abattoir animals and selected food samples also continues as planned. Expansion of the range of food sample sources is being considered, as is winter wastewater sampling to allow comparison of summer and winter isolates. A first phylogeny of human sample data (which was contributed by a collaborator) has been produced. A first MLST tree (using a combination of PATH-SAFE data and existing Enterobase data) comparing the diversity of blood stream and UTI human samples against livestock, poultry, deer and canine samples has also been produced. Discussions around access to sequencing data from clinical isolates to allow comparison of E. coli genomes from animal, food and the environment with clinical datasets continue.

Part A: Focusing on Foodborne disease (FBD) in the agri-food environment:
appraise current surveillance systems by identifying existing environmental data and sampling infrastructure for the detection of FBD pathogens
explore whether novel analysis technologies (for example WGS of pathogens from wastewater and shellfish) can improve the accuracy, speed and efficiency of outbreak detection and associated risks

Current status: Following a substantial amount of planning and protocol development the Taw and Torridge pilot site wastewater, river water and shellfish sampling and analysis was successfully initiated in January.  Sampling and analysis have also begun at the North Wales pilot site being led by Bangor University. Furthermore, analysis of UKHSA COVID-19 archived wastewater samples for Norovirus is underway at the Environment Agency and the first batch of Norovirus positive samples have been transferred from EA to Cefas for whole genome sequencing.

Part B: Focusing on antimicrobial resistance (AMR) surveillance in the agri-food environment, a number of projects will support this work:

Current status: Alongside the continuation of raw meat E. coli isolate sequencing, sample collection and analysis has started on two other projects, raw milk in collaboration with the National Milk Laboratories and animal feed (raw ingredients and finished feed) in collaboration with a feed mill.  Sheep abattoir recruitment is ongoing for the sheep survey project (FSA, Defra, VMD and APHA) and piloting of methods has started for the cattle survey project (SRUC).

Part A: Investigate the technology readiness levels (TRLs) of in-field FBD and AMR diagnostic technologies. This includes horizon scanning, stage of development and end-user needs. The results of these investigations will inform options for the next stages of in-field testing.  The co-design of applications with end-users will be critical to ensure real-world applicability.
Partners include: Fera, University of Lincoln

Current status:  The horizon scanning literature review (in collaboration with the University of Lincoln) has resulted in 13,000 hits on broad potential technologies and 5,000 hits on a more focused ‘known’ FBD diagnostics technologies.  Hits are being tagged per technology to make the next step, review of full text, more efficient.  Technology readiness level (TRL) definitions have now been developed and are undergoing review ahead of being incorporated in to the TRL framework. Outreach to stakeholders and potential end users has generated over 20 responses to date and will continue using a snowballing approach.

Part B: The key aim of this activity is to repurpose rapid, in-field wastewater diagnostic technology that was developed in response to the COVID-19 pandemic for detection of FBD. This workstream will aim to demonstrate its viability, economic value, and versatility in one or more agri-food settings.
Partners include: UKHSA

Current status:  20/30 Labs have been awarded the contract to deliver the laboratory aspects of the discovery phase.  The project was initiated in December 2022 and will initially focus on investigating the use of LAMP for the detection of Salmonella spp, Listeria monocytogenes and Norovirus in wastewater, with a secondary aim of also including adenovirus, astrovirus, rotavirus and sapovirus if possible.

The overall aim of this workstream is to create a scientific and evidence-based understanding of the nature and extent of AMR in the environment and the drivers that influence this. This pilot will deliver an agreed and tested methodology for environmental AMR surveillance. This will include an environmental IT platform that will enable a scaled-up surveillance programme to be undertaken. This IT platform will be designed and developed so that it will have the capability to integrate AMR surveillance data collected from humans and animals. The overall ambition is to establish a UK One Health surveillance system for AMR.

Current status: Chemical analysis for phase 1 and 2 of the pilot river sampling work is in the final stages. Microbiological analysis (MIC testing) and molecular analysis (high throughput detection and quantification of Antibiotic Resistance with Resistomap) is progressing. The last phase (phase 3) of river catchment sampling will begin in Jan/Feb 2023.

The following other R&D projects remain ongoing and are progressing:

Development of the exemplar Environmental Surveillance System (supported by Deloitte) continues. Wireframe meetings took place in December 2022 and January 2023. The Alpha phase of development is concluding and the Beta phase is expected to start in February 2023. Discovery work for a future AMR One Health Surveillance System will resume in Jan 2023.

For more information and updates on the PATH-SAFE programme, read the latest PATH-SAFE newsletter.

If you would like to get in touch with the PATH-safe team, you can email them at pathsafe@food.gov.uk

The cross-departmental project team behind Pathogen Surveillance in Agriculture, Food and the Environment (PATH-SAFE), a major programme of pathogen surveillance, has been awarded Government funding for the project through the second round of HM Treasury’s Shared Outcomes Fund.

To mark the end of World Antibiotic Awareness Week, Eva Scholtus and Emily Parr from the Microbiology Society discuss our collaborative workshop series as part of the Pathogen Surveillance in Agriculture, Food and the Environment (PATH-SAFE) programme.